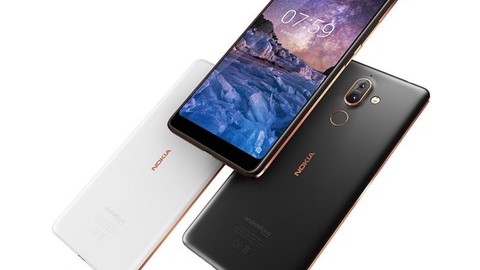 NEW DELHI: Finnish company HMD Global that makes Nokia smartphones has refreshed its line-up to gain some momentum in the competitive mid-price segment in India.

The recently-launched Nokia 7 Plus runs the “Android One” platform — the unmodified Android operating system (OS) with a promise of improved security via frequent updates.

What works for the device?

The device sports curved back and slim edges in a comfortable and neat package. Available in black and white colours, the smartphone has copper-coloured metallic strips running around the chassis, rear dual-camera setup and the fingerprint scanner, giving it a premium look.

The fingerprint sensor is placed under the cameras on the back.

With thin bezels, the 6-inch Full-HD+ screen (with a display resolution of 2,160 x 1,080 and 18:9 aspect ratio) gives a big-screen experience in the same width as a traditional 5.5-inch display device. Moto X4 has a 5.2-inch display and a front-facing fingerprint scanner.

Running Netflix original documentary “Chasing Coral” did not produce any lag, with the device providing vivid hues and an impressive wide colour gamut.

The device is powered by Qualcomm Snapdragon 660 Octa-core processor with 4GB RAM, which is slightly better than Moto X4 that comes with Snapdragon 630 with up to 6GB RAM.

We did not experience any noticeable lag while using it for light gaming like “Football Strike”.

However, with demanding games like “real Drift Car Racing”, we needed to turn the background apps off for a smooth experience.

According to HMD Global, the battery has been optimised and integrated for maximum performance and battery life.

With a 3,800 mAh battery, we could run the device for almost a day on a modest use. While playing heavy games, it could only last a little over 17 hours.

Nokia 7 Plus comes with a dual-camera system with enhanced dual-sight and dual sensors with ZEISS optics.

The photos were rich in colour, crisp and maintained the lighting effects, thanks to company’s innovative optical hardware and imaging algorithms.

Even the 16MP front camera comes with ZEISS optics and high-quality lowlight capability.

People can also use both the cameras at the same time and click pictures with cameras on both the sides.

The device sometimes takes time to process the photo.

Nokia 7 Plus is also not for heavy gaming as the effort ends up in an overall performance dip.

With Stock Android gaining preference among buyers, Nokia 7 Plus is a good option in the mid-price segment. Its promising hardware, stylish looks, and regular updates could turn the game into its favour.