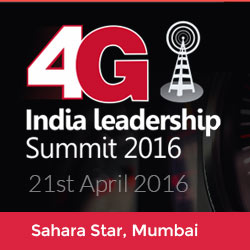 4G India Leadership Summit will deliver a diverse programme of expert speakers, senior operators, leading service providers and handset manufacturers to discuss the future of mobile broadband in India for taking 4G penetration to the masses.

India boasts the most promising LTE markets in the world keeping in view the sheer size of population & rising popularity of 4G enabled smartphones – India is expected to have 90 million 4G subscribers and 180 million 4G enabled smartphones by 2018 with smartphones market touching close to 200 million by the end of 2016. Moreover, It is widely expected India would overtake Japan to be the world’s third largest 4G LTE market and US to be the world’s second largest smartphone market by the end of 2017. more details 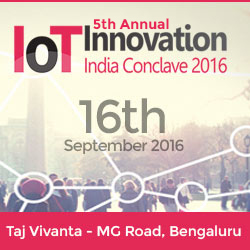 After successfully conducting M2M forum for last 4 years in India next year 2016 we are enhancing towards IoT and would be making our IoT forum more bigger, better and more action packed – IoT Innovation India Conclave 2016 is scheduled on 16th September 2016 at Taj Vivanta, MG Road, Bangalore.

This year in 2015 we had big brands like TATA DoCoMo Business Services, Wipro, IBot, IBM, Cisco to name a few associated with us as brand partners and we had a industry gathering of 150 industry professionals present at the event.

Next year 2016 we would be making it a much bigger event and would be conducting Startup’s roundtables as well and would be attracting 200 industry professionals from IoT business ecosystem in India comprising of Telco’s, Enterprises , Service Providers, Application Developers, System Integrators & Startup’s with a focus on Automotive, Smart Cities & Smart Metering, Security & Surveillance, Healthcare, Transport & Logistics / Fleet Management, Manufacturing, Utilities, Aviation and Retail. More Details