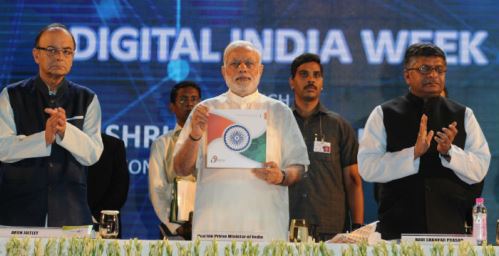 In a show of support towards the government’s Digital India push, members of India Inc on Wednesday announced a total investment of Rs 4.5 lakh crore towards various projects which their companies would be undertaking in the next few years. It is estimated that the various projects and initiatives unveiled by the government and the private sector companies would offer employment to over 18 lakh people in the next five to 10 years while driving digital inclusion throughout the country.

“This is just the amount that people on the dais have announced, but there are many more who are working in this direction,” Prime Minister Narendra Modi said while applauding the initiatives by the industry and highlighting the need for digital revolution in the country, saying it is necessary to deal with problems like corruption, help provide transparent and efficient governance and bridge the rich-poor divide.

Modi talked about building digital highways, and said there will be establishments where there is optical fibre network. He talked of taking broadband connectivity to villages and farmers. “Until we take the services to the millions of farmers in the villages, we will not be able to uplift the nation,” he said. Modi said that the digital divide is a bigger evil than the gap between rich and poor.

The Prime Minister urged netizens to communicate with the government through social media, and said that very soon “e-governance will turn into m-governance, and everything that the government has to offer will be available over the mobile phone”.

The Indira Gandhi Stadium, the venue of the event, was packed; the turn-out was expected to be close to 10,000 people, and there were 12 chairmen and CEOs of India’s biggest and most powerful companies.

Sunil Mittal, chairman of the Bharti group, announced Rs 1,00,000 crore of investment over the next five years to create deeper infrastructure in rural and urban India, and in areas of e-health and e-education. He also said, “We will help in creating electronic manufacturing to reduce the burden of imports into the country.”

Reliance Industries chairman Mukesh Ambani said that Jio, Reliance’s greenfield telecom venture, will be working with manufacturers for made-in-India mobility devices, and committed that it will be distributed through the company’s distribution network. Ambani announced investments of R2,50,000 crore, a part of which will go into building a retail network of 1.5 lakh stores, and another part to set up a start-up fund.

Aditya Birla Group chairman Kumar Mangalam Birla said that through Idea Cellular, it will create the infrastructure that is required to aid Digital India. He announced an R42,000 crore ($7 billion) over the next five years in the field of network rollout, building broadband network, investments in WiFi, mobile wallets, in areas of mobile-based education and healthcare, and in creating a digitally enabled township in the suburbs of Mumbai.

New policies that would bridge the digital divide in India were also announced — the ESDM policy that will aim at bringing down imports to zero by 2020, the EDF policy and the e-Governance policy.