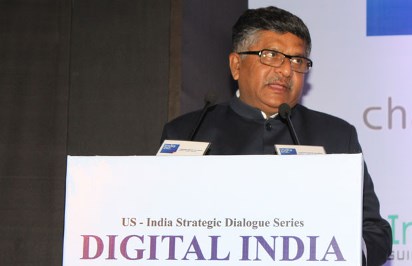 NEW DELHI: Union telecom minister Ravi Shankar Prasad Tuesday said that a ‘skilled India’ is one of the three priority areas for the government which would compliment the ongoing ambitious Digital India and Make in India programs.
“Skill India is equally compelling,” said Prasad at the Digital India Summit, organized by Times Television Network.

He added that Digital India is an enabling platform for change and will not be fulfilled without the Make in India initiative which requires Indian skills to be leveraged.

“Availability of content in local languages is necessary,” he said and informed that the government has launched the Disha initiative – a two to five hours learning program to get hands-on knowledge of digital platforms.

“Digital India needs to bridge digital divide, and with the focus on rural India, the government is bringing in broadband,” the minister added.

Admitting that Right of Way (RoW) had been a challenge; Prasad said that 90% of the RoW issues have been resolved so far.

State chief ministers are enthusiastic about the national optic fiber network that envisages connecting 250,000 gram panchayats (village blocks) in three years, and then beyond the block level, every remote household.

Prasad said that government wanted to create an enabling environment and that there were immense opportunities for Indian businesses across sectors.

“As we move along, there should be no differentiation in the name of preferential access and it’s consumers who have right to choose services,” Gajwani added.